Showing posts from March, 2015
Show All

Arming the Immune System Against Cancer 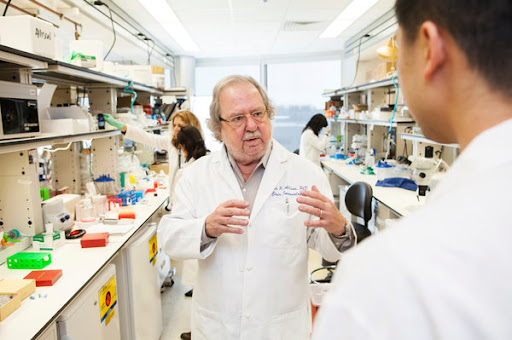 Arming the Immune System Against Cancer

James P. Allison in his laboratory in Houston. He discovered an alternative to using radiation to fight cancer, finding a way to set T-cells loose on the disease.Credit Scott Dalton for The New York Times Continue reading the main story Claudia Dreifus James P. Allison is the chairman of the immunology department at the University of Texas M.D. Anderson Cancer Center in Houston. His seminal research opened up a new field in cancer treatment: immunotherapy. Instead of poisoning a tumor or destroying it with radiation, Dr. Allison has pioneered ways to unleash the immune system to destroy a cancer. Two years ago, Science magazine anointed immunotherapy as the “Breakthrough of the Year.” More recently, Dr. Allison, 66, won the Louisa Gross Horwitz Prize, often a precursor to a Nobel. Our conversation has been edited and condensed. Q. The class of drugs you’ve helped invent has been hailed as one of the first truly new can…
Post a comment
Read more
March 04, 2015

Domestic Violence Reporting for Nurses Spotting the warning signsBy Sue Montgomery, RN, BSN, CHPN
4
inShare Nurses have a legal and ethical responsibility to report suspected cases of domestic violence. However, abuse can take many ugly forms, some of which are easier to spot than others. In this article, we’ll talk about the warning signs to help you better protect your patients.
Scope of the Problem
According to the Centers for Disease Control and Prevention (CDC), 24 people in the U.S. are victims of physical violence, rape or stalking every minute. That adds up to more than 12 million women and men each year.  The most recent National Intimate Partner and Sexual Violence Survey found that:
◗  One in four women and one in seven men have experienced severe intimate partner violence (IPV). An intimate partner is a current or former spouse, boyfriend, girlfriend or partner.
◗  Women are disproportionately affected by sexual violence, IPV and stalking. Women are four times …
Post a comment
Read more

Risk for stroke is greater in people who oversleep..

Oversleeping feels like a treat on the weekend, but regularly sleeping too much is actually a sign that there may be a medical problem at play. According to a new study, people who sleep more than eight hours a day have a higher risk for a stroke compared with people who sleep six to eight hours.

In the new study, published in the journal Neurology, researchers followed nearly 10,000 people ages 42 to 81 for almost 10 years. They recorded both the amount of sleep they typically got each night, as well as whether they had a stroke.

Around 7 out of 10 of the men and women slept six to eight hours, and about 1 in 10 slept more than eight hours a night on average. The people who slept the most had a 46% higher than average risk of stroke when the researchers accounted for other variables that could contribute t…
Post a comment
Read more
More posts